How are things before, during, and after the Pandemic?


Katharina Heeg (Tohoku University alumna, staff member at the Dr. Oetker company in Toronto) cultivated her bonds with Prof. Kazuko Suematsu (Deputy Director of the Global Learning Center at Tohoku University) as an IPLA student through many intercultural activities designed by Prof. Suematsu and other employees at the Global Learning Center. She returned to Tohoku University as a master’s student and further deepened her connection with Prof. Suematsu. Through this online reunion, Katharina and Prof. Suematsu discussed what they learned through their study abroad experiences, the impact of the pandemic on their careers, and their future plans.

Part 1: Memories of the Past, a Lesson for the Future

Andi Ramdani (A.R): It is my pleasure to meet both of you virtually! Tell me how thing are going.

Katharina Heeg (K.H): Thanks, I am doing well!

A.R: This is always making me curious: did either of you have any issues related to the intercultural experience during your study abroad?

K.S: I spent almost 15 years living abroad from bachelor to doctoral levels with some working experiences in between. So, when I finally came back to Japan, there were lots of issues with adjustment that I had to go through. For example, when I had to sign-up for the housing, gas, and other payment bills all by myself in Japan, I was still not able to adapt to the stamp (inkan) system here, because when I was in the United States, all things can be finished by only signing the documents. Another thing was that I had to re-adapt to the Japanese communication culture. It was hard to tell whether my counterpart intended to say yes or no when exchanging conversations, because it is always vague and ambiguous. These experiences really helped me understand the cultural adjustment that international students would have to go through.


K.H: I found there are many differences, for example, Japan is a high-context society, while in Germany, you speak your mind honestly. That became a big adjustment for me. In Japan, I had difficulty finding the meaning of what people said. But I felt lucky to be a part of IPLANET (IPLA students’ community), as I could study with Japanese students and understand their culture. From there I could understand and was able to communicate with Japanese people, even in English. I also could learn about how to read their context, “read the air”, so it was a big adjustment for me.

K.S: I remember. Kathy doesn’t like Japanese food. During her study here she ate only Japanese curry almost every day!

K.H: Honestly, that was the hardest part of the exchange! But I came back to Japan again (for the master’s program), and I think it proves how much I love Japan and its people.

K.S: When I first meet you, my impression was that you were an ordinary, typical exchange student from Europe, but I saw you change drastically during your study as an IPLA student. I think you have developed tremendous strength while enjoying your life in Japan. The exchange student experience definitely helped you grow. Then, after you came back again to Japan as a master’s student, there was another set of challenges. Studying in the master’s program was a lot different from an undergraduate exchange. Right? However, I found you dealt with the challenges positively, especially in developing your “Senpai-ship” spirit (Leader spirit) when you became a Teaching Assistant.

K.H: I learned a lot from you. Especially in terms of soft skills, you taught me about how to behave and communicate with different kinds of people. I think that, based on your experience dealing with people from different cultures, it is interesting to learn how you mastered your soft skills so well. Also, your whole story is very interesting, such as your international experience background, your independent experience when you decided to study in the U.S at such a young age even though at that time you didn’t have sufficient competence in English, and you must have struggled with this. From here, I can see that you were also an independent young woman, so it gave me a lot of courage to trust myself, especially being in Japan where I didn’t speak Japanese very well, and to achieve whatever I want.

A.R: Did you gain a new skill or competence during your study as an IPLA and master’s student at Tohoku University?

K.H: Yes, of course, I have developed many skills. For example, I learned to be more understood by people from different cultures and respect their culture instead of immediately rejecting it. I met with many people from different cultural backgrounds in IPLA, and at first, it was kind of weird to see people doing something differently from me, which made me think about why they were doing something that wasn’t effective or efficient from my perspective. But then I started to learn and understand why they were doing this, and that it made sense based on their cultural background. From this, I started to be able to accept people basically as who they are, accept their behavior, and spend time together with them. 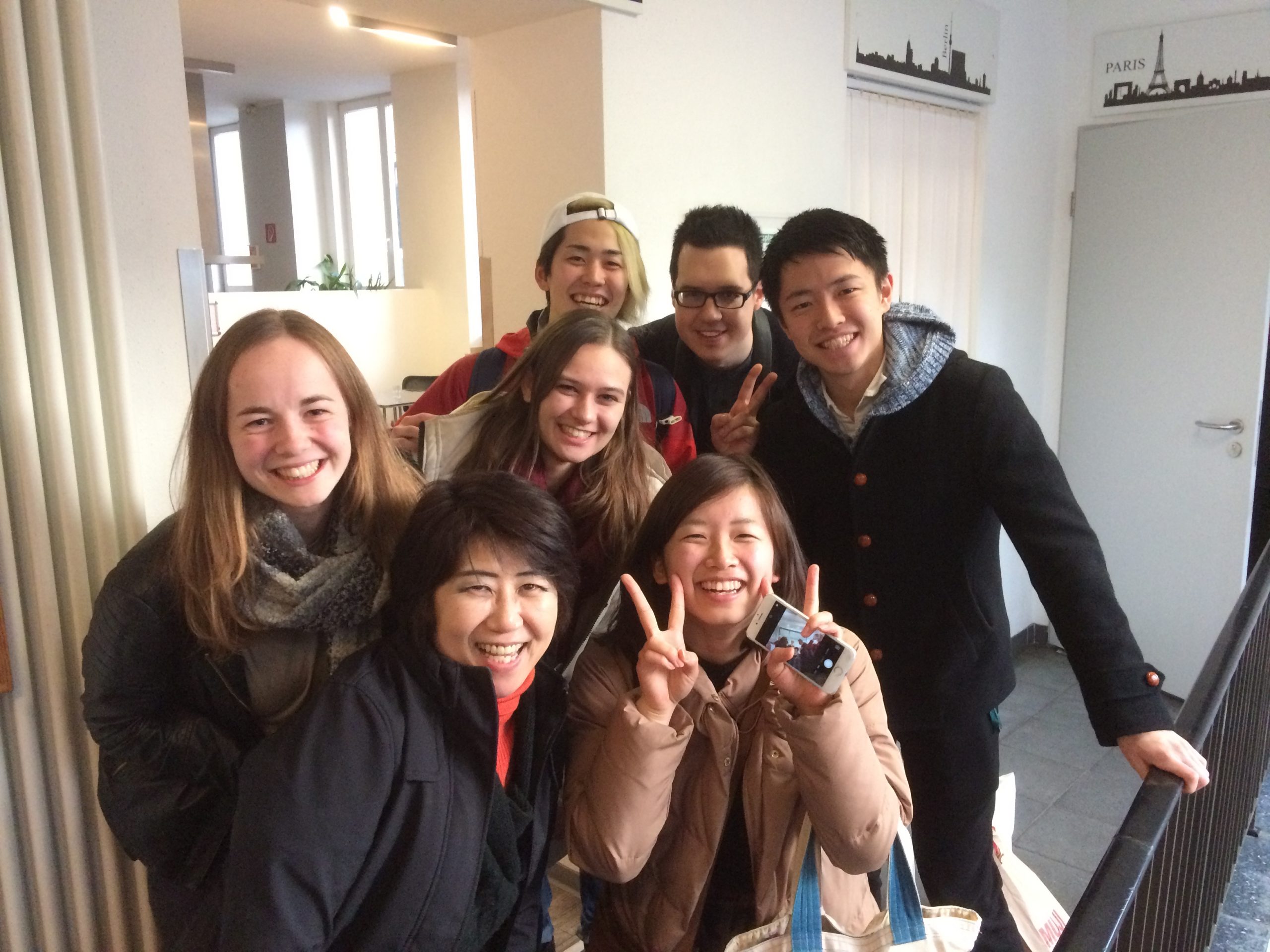 Photo taken with Katharina and other International student

K.S: I am proud to hear that! Well Kathy, for your information, Tohoku University offers about 60 intercultural collaborative learning classes for international students to integrate with Japanese students. It puts Tohoku University first among national universities in Japan regarding the number of classes provided for international and domestic students. Also, it has become a core of the Tohoku University international education program over the past 10 years. I think this has become a strength of Tohoku University. However, based on an internal survey, even though we have a lot of international students, especially in engineering, we found that there are still many of them who are unable to communicate and make friends with Japanese students. So, I think it is very important to promote this class, so we start commingling both sides in one class, then we hope that mutual communication will also spread outside the campus.